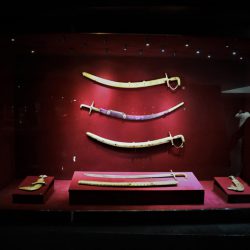 Museum of Antique Gems and Jewelry

The Museum of Gems and Jewelry offers a new discourse in its field of specialization and has a different view from other museums in its field; a perspective that can have important effects on the country's jewelry industry.

Like other forms of art, jewelry is a reflection of the feelings and intelligence of its creator. When human beings began to live collectively, they paid more attention to adornment, beauty, and the use of accessories to beautify themselves and their living environment. Search for beauty was one of their inner needs. The first pieces of jewelry made by human beings were inspired by nature, but gradually, through their creativity and innovations, more sophisticated pieces were made, some of which were magnificent and spectacular works of art.

The Museum of Antique Gems and Jewelry holds a selection of works from the treasuries of gem and jewelry, statues, ivory, weaponry and history. The geographical scope of these works is global. Regarding the typology of the Museum of Antique Gems and Jewelry, it can be said that, in terms of the form, it is a roofed space (a closed space), in terms of content, it is a specialized museum and in terms of scale, it is transnational. This museum is located on the first floor underground with an area of ​​about 1100 square meters.

The jewelry in the museum is first divided into two groups of ancient and historical, and then the group of historical items, which constitutes the majority of the museum’s objects, is subdivided into four classes based on the functions of the objects. These main classes are in turn divided into subgroups.

The main four divisions of the objects based on their applications are: 1. Objects displaying social status; 2. Decorations; 3. Objects indicating political position; 4. Accessories and tools.

The initial selected works were a total of about 1300 object codes from the treasuries of gems and jewelry, statues, history, ivory and weaponry. After a detailed study by experts in the field of original Iranian jewelry and ancient ornaments, more than 900 works were selected to be exhibited in the museum.

The Museum of Gems and Jewelry offers a new discourse in its field of specialization and has a different view from other museums in its field; a perspective that can have important effects on the country’s jewelry industry. One of the goals of the museum is to create a base for jewelry specialists, specialized training and knowledge promotion, as well as revive the arts that are in danger of disappearing in various fields of jewelry making.