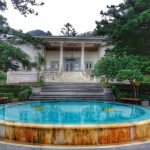 Marmar Mansion Museum was built in 1937. Its construction lasted 4 years (1933-1937). It is 600 square meters in area and is located in a 6-hectare area. In the first Pahlavi period, it was used for 4 years and in the 2nd Pahlavi period, it was used for 37 years. This mansion was regarded as the second seat of the government and was the place for holding sessions and conferences including the session of forming the cabinet of Jamshid Amoozegar, the fifth plan of financial affairs development and education revolution of the country. One of the events that happened in this mansion was the escape of the second Pahlavi shah who, during the August 19th coup, escaped to Ramsar airport and then to Iraq and finally to Rome according to available documents.

The building was designed by Belgian engineers and the architecture was implemented by Iranian artists. The main architect was Abolghasem Vaseghi. The mansion façade was built out of the marble of Kerman and Mashhad and was moisture-insulated using nanoparticles technology in 2019. Inside the mansion, the ceiling stuccowork and floor parquet are different in terms of design and color in different halls. Part of the stuccowork which was a combination of European and Iranian architecture was done by Isfahani and Tehrani artists. The color of the stuccowork was from plants and was done by Italian artists. In making parquet, four types of wood i.e. the wood from areca, witch elm, cypress and walnut have been used.

This mansion was repaired several times. The main repair was done in 2017 including: correcting and renovating the colors, stuccowork and parquet. Also, the outer walls of this mansion were made moisture-insulated using nanoparticles technology. This museum includes 6 display sections: conference hall, two halls as living rooms, a main corridor in the south of the mansion, a hall as a dining room and a hall for work.