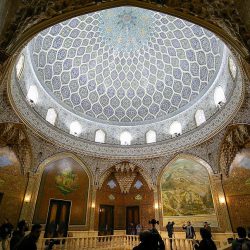 The Museum of Iranian Art was established in a very beautiful and old marble mansion. ...

The Museum of Iranian Art was established in a very beautiful and old marble mansion. Located in the center of Tehran, the marble mansion was built by prominent Iranian architects and craftsmen with green marble stones inscribed with flowers, plant and animal motifs. The mansion is placed inside a beautiful garden with an area of ​​three and a half hectares and 2870 square meters of floor space. Its construction began in 1925 and continued for more than a decade.

With its beautiful stone carvings, the exterior of the building is reminiscent of Achaemenid art. In the architecture of the mansion, different styles, including Iranian and other architectural styles can be seen. Leon Tadossian was the head architect of the mansion, accompanied by a draftsman named Boris, and Haj Akbar Kachar, an architect. Various Iranian style decorations such as tiling, masonry, mirror decoration and inlay can be seen in this building. Prominent Iranian artists such as Master Hossein Kashitarash Esfahani, Mohammad Sani Khatam, Hossein Abdolbaqi Kashani and a number of other distinguished craftsmen were involved in the construction of the building. The skeletal frame construction and brickwork of the mansion were completed by 1934, and then different artists each decorated part of the building with their own special art. The building was nationally registered on June 20, 1978 with the registration number 1606.

The museum has selections from the history of Iranian art in different eras on two floors with several halls. On the ground floor, the first three halls introduce Iranian works of art from prehistoric times until the early Islamic era, including painted pottery, appliances and utensils. In another hall, there is a spectacular selection of magnificent works of Iranian-Islamic art in various fields. To enter the upper floor halls, you will pass a foyer that is full of impressive and stunning decorations. Upstairs, there are halls with displays of excellent Iranian painting, weaving, calligraphy and book decoration.

The entrance hall or the foyer displays a unique collection of interior decorations. The walls are covered with orange-yellow marble up to the height of one meter and the ceiling is plaster molded and painted with a green undertone. Marble stairs with stone carving and embossing are inspired by Achaemenid and Sassanid art and decorated with floral and plant leaf motifs. Over the foyer, there is a dome-shaped arch, whose design is inspired by the dome of Sheikh Lotfollah Mosque and the work of artists such as Master Hossein Lorzadeh, Hossein Kashitarash, Ismail Khaknegar Moghaddam and Ebrahim Kazempour. The arch has plaster Muqarnas and seven-color tile decorations by Haj Mahmoud Arshnegar and gilded designs by Master Hossein Behzad. At the stem of the dome, there are lattice windows with spectacular design that let the sunlight in to fill the interior of the building. The north and south walls of the foyer are adorned with paintings by German artist Albert Honmann depicting a railroad and a port – most probably the Veresk bridge that connects the railway between Tehran and the Caspian Sea and the oil-rich port of Khark. There is another painting that shows the Apadana, the greatest palace at the Persepolis. In addition, on the west and east walls, two narrative paintings with gildings by Hossein Taherzadeh Behzad can be seen at the height of six meters. In the corner of the foyer, plaster muqarnas appears in the form of chandelier-shaped pendants with beautiful plant motifs. Influenced by Sassanid art, the entrance doors of the halls are inlaid with narrative motifs, hunting grounds, plants and legendary creatures by Master Seyed Ali and Master Nowruz. The tour of the museum begins on the right side of the ground floor with the halls of history. There are four history halls on the ground floor and nine on the upper floor.