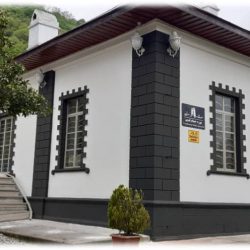 At the same time when Marmar Mansion was being built in 1937, this bathroom was built in the yard of the mansion in the first Pahlavi period. Generally, using this bathroom was only in the first Pahlavi period. It has two small ponds one of which was heated by a traditional furnace. The tiles used in the bathroom have been preserved from the production time until now without even a small change.

At the entrance to the bathroom, there is a small pond of cold water. This is because in the past it was customary to first put the feet in water so that they would be clean before entering baths. Also, before exiting the bathroom, they put their feet in it so that the cold water would balance their body temperature and prevent catching colds and diseases such as varicose veins and high blood pressures. Based on available evidence, the equipment of the bathroom was provided by a German company.

After being renovated and rebuilt in 2017, the mentioned building was used as the Old Bathroom Museum in order to give more service to enthusiasts and visitors.